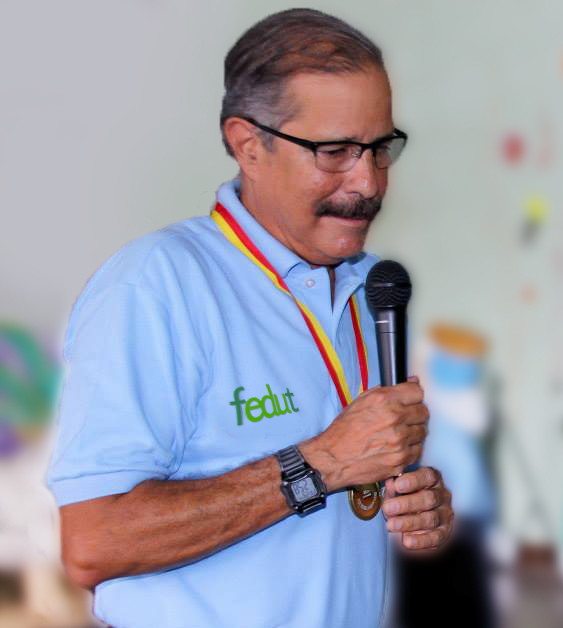 Jorge Alberto Tchira Zapata was born on May 17, 1946, in the city of Barranquilla. His childhood was spent in the home of his maternal grandfather, who was a very poor farmer, with a great human quality and unending solidarity. His mother, María Dolores Zapata, also a humble woman, only had the opportunity to study up to the 2nd grade of primary school, and she set herself the task of giving her son a good education, even beyond her economic possibilities. She was very clear that the only way for the poor to get ahead was to study.

She inherited a great sense of solidarity from her father and instilled it in her son Jorge Alberto from childhood, because even though he was her only son, she always taught him to share all his things with his cousins, like brothers and sisters. María Dolores Zapata gave her son two great inheritances: the desire to improve through study and this sense of solidarity.

At the age of 22, Jorge Alberto decided to leave the Universidad del Atlántico, where he was studying Chemical Engineering, and travel to Cali, without knowing anyone in that city, to try to make his way in life, as he felt that his mother had made a superhuman effort and that now it was up to him to take full responsibility for his life. It was not easy, but little by little he carved a place for himself in this new and welcoming city. He progressed in his work and completed his studies at night. Since the possibilities of promotion in the multinational Merck Colombia, where he worked, were in the area of business administration, he decided to focus his studies on this and received technical training in the head office in Darmstadt, Germany for 9 months. His new undergraduate studies were at the Universidad del Valle, and later at ICESI, Javeriana and Top Management, among others.

During his youth, he was always on a spiritual quest. Thus, one day in 1970, he decided that his mission in life was to offer education for the poor. It was as simple and easy as that, without any extraordinary circumstances that prompted him to make that decision. Perhaps influenced by his humble origins and by his mother's emphasis that the way out for the poor was education, which he had already had the opportunity to prove through his own life. Moreover, he remembered the Confucian saying he had learned as a teenager: "If you give a man a fish, you give him a meal. If you teach him to fish, you give him food for life.”

He began his social educational work at a distance, paying for the education of the children of his poor cousins in Barranquilla, and gradually expanded this work in Cali. For more than 25 years, he did it in a personal and informal way, and then, on the 29th of February 1996, he created the Fundación Educación Para Todos - FEDUT. He included his mother, María Dolores Zapata, wife and children, as founding members, with the vision of turning it into a family life project, and hoping that his children would grow up, like him, with the example of solidarity and progress through study.

The Barranquillero who stayed in Cali to give education to children

47 years ago he came to the city and created the 'Fedut' foundation in Barrio Salomia, north of Cali, to provide a better future for children living in violent environments. Jorge Alberto Tchira Zapata, a 69-year-old business administrator, decided to dedicate his entire life to seeing the children of the Salomia neighborhood (north of Cali) smile for a good future. The challenge he decided to take on in life was to give free education to minors who do not have the money to pay for primary and high school studies ...